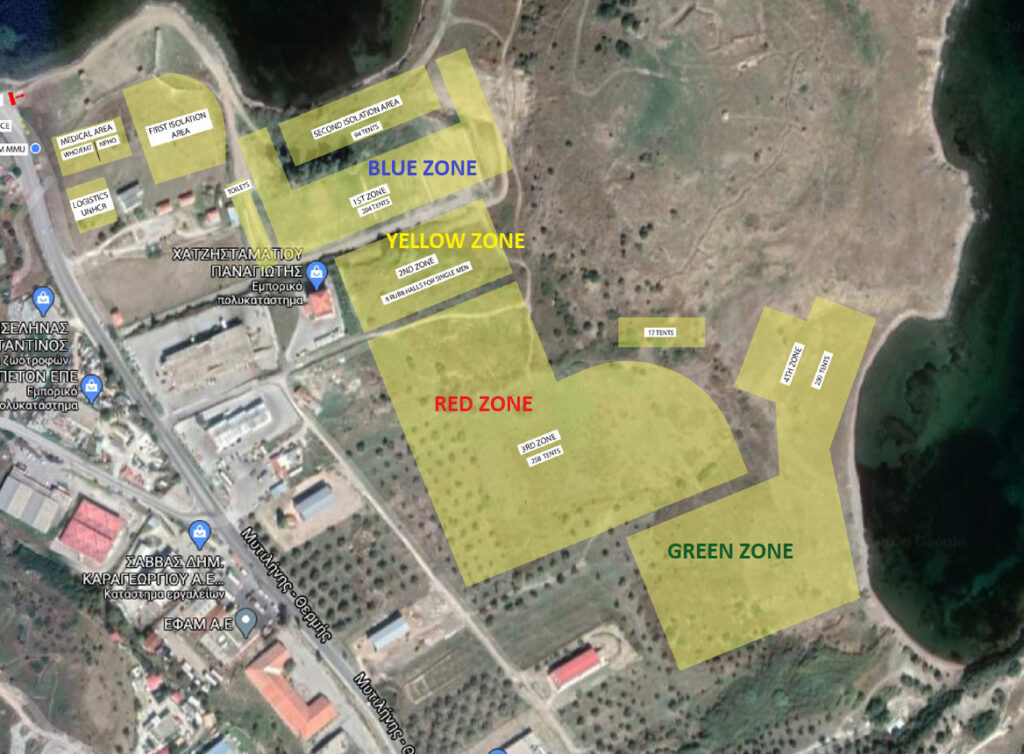 In September 2020, in the aftermath of the Moria fires, the European Commission announced that a dedicated task force would be established with the ostensible purposes of  “implement[ing] a joint pilot with the Greek authorities for new reception facilities” and ensuring “adequate living conditions, more certainty through faster procedures and more balanced responsibility-sharing and solidarity.” Far from these stated objectives, the reality in Lesvos and on the other Aegean islands has been the extension of the European Union’s existing hotspot approach through the knowing creation and perpetuation of inhumane living conditions into effective prison camps and the continued sacrifice of fundamental rights to expedited and summary asylum procedures.

The hasty establishment of Mavrovouni Temporary Reception and Identification Centre (TRIC) in October 2020 – on land that was leased for five years, calling in to question the camp’s alleged temporariness (see here, here, and here) – has, since then, given way to constant construction works, despite knowledge that the site is contaminated with lead and therefore poses an acute health risk to all contained there. Fires, heavy winds, flooding and ongoing building works have forced the camp residents’ constant relocation from one tent or shelter to another, while prospects of moving outside of the camp (to accommodation in shelters for vulnerable people, for example) have progressively closed. Some families told the Legal Centre Lesvos that they were forcibly moved from their tents or containers, at least, once per month, due to the constant – and disorientating – re-shaping of the camp’s infrastructure. They also complained about the frequent presence of dust in the air created by the permanent construction works and movement of trucks passing through the camp, which also contaminates their food and water.

Mavrovouni’s neatly aligned rows of nearly 500 UNHCR-branded tents, containers, and rub-halls might appear, at first glance, better organised than the olive groves that sprawled around the former Moria RIC. But this image, satisfactory only for politicians’ brief visits or organisations’ promotional videos, belies a fundamentally different reality: the effective detention of migrants in shelters battered by extreme weather conditions, with scarce and inaccessible sanitation facilities, and under ever-increasing police surveillance – yet facing chronic insecurity.

Mavrovouni camp is organized around four main zones – blue, yellow, green and red – which hosts people dependent on their profile (vulnerable, single men, families) and the capacity of each zone given the ongoing construction works. Crucially, people are also grouped into the different sections of each zone depending on their status in the asylum procedure. For instance, both people whose asylum claims have been rejected on appeal and recognised refugees – who are all currently considered to be “outside of the asylum procedure” by the Greek authorities and therefore ineligible for the “housing” and cash assistance provided to asylum seekers – are often hosted within the same rows or group of tents, containers or rubhalls in the camp, including in less “comfortable” shelters and more remote areas. Families with children whose asylum claims have been rejected on appeal are being concentrated in large rubhalls hosting 80 to 100 persons of the “green zone”, which is also the most remote and one of the dirtiest areas of the camp (see picture below). Families hosted there complain about the lack of space and safety for their children, given the absence of an escape route in case of fire of the rubhall and the dirt, rats and bed bugs which they are exposed to.

Vulnerable persons (including among others people with physical disabilities, chronic health conditions, single parents with minor children and pregnant women) are mostly hosted in the “blue zone” of Mavrovouni camp, which alternates between tents shared among eight persons and ISO box containers. However, at present, this part of the camp lacks sufficient capacity to host all persons with vulnerabilities. Some of the Legal Centre Lesvos’ clients with severe medical conditions and physical disabilities are forced to live in other zones, where they sleep on the floor of tents shared with unrelated persons. Furthermore, the shower facilities adapted for persons with disabilities (which have running water, as opposed to the bucket showers found across the rest of the camp) were built outside of the blue zone – and at approximately five minutes’ walking distance. This means that they are in practice very difficult to access for people with limited mobility or in wheelchairs.

The European Court of Human Rights (ECtHR) has, since the start of the year, repeatedly held that the living conditions in Mavrovouni RIC put people with severe medical conditions at imminent risk of irreparable harm and breach the prohibition on torture, inhuman and degrading treatment found in Article 3 of the European Convention of Human Rights. Despite the ECtHR’s repeated instructions to the Greek government to urgently transfer war wounded persons, pregnant women, victims of torture, children with epilepsy or autism, and other vulnerable people into appropriate and safe accommodation and ensure their access to adequate medical care, many – both those named in these cases and other hundreds in analagous situations – are still left without assistance in Mavrovouni camp.

In any case, however, the shelters available in Mavrovouni camp (whether tent, container or rub hall) are invariably inadequate to ensure people’s health or safety. Among all the ISO boxes containers, rubhalls and tents installed in Mavrovouni camp, only the ISO box containers relocated in the “blue zone” from the former municipality-run Kara Tepe camp (which was used to host vulnerable individuals and families, and forcibly closed by Greek authorities in April this year) are equipped with air conditioning. This means that during the summer, where temperatures reached 40°C, the vast majority of people living in the camp were left without proper ventilation. This also means that people will most certainly be left without proper heating during the upcoming winter, where temperatures will drop below freezing and snow may well fall.

New lightweight “plastic containers” have now been installed as accommodation for families in the “red zone” of the camp and have space for five to eight persons sleeping on the floor. The manufacturers of these containers, a partner of UNHCR, describe these as short-term accommodation “to house families for a couple of nights” (emphasis added). Those containers have fire safety guidelines on the doors, instructing residents that they have only two minutes to escape in case of a blaze, due to the highly flammable nature of the material. The instructions further stipulate that there must be at least five metres between each container. In Mavrovouni, however, there is only approximately one to two meters between each unit (see picture below).

Despite the well known risks of fires, the Greek authorities continue to pile highly flammable and unheated containers close to each other, with no regard for the health, safety or lives of the people forced to live there.

The inhumane living conditions imposed on people in Mavrovouni camp are coupled with pervasive  anxiety and uncertainty created by de facto detention, mass rejections and accelerated assessments of residents’ claims.

As of August, almost half of the camp population had already had their asylum claim rejected on appeal, and are therefore officially considered to be “outside of the procedure”. This means in practice that they no longer have access to UNHCR cash assistance, nor legal aid support from state lawyers, nor social security services, such as health care (with the exception of emergency services).

In any case, UNHCR has announced the termination of its cash assistance programme as of the 15 September 2021, the date in which all persons eligible are requested to withdraw their last cash allowance. There has been no official announcement by the Greek State confirming that this programme will in fact be continued, or if so, under which eligibility criteria. Clients of the Legal Centre Lesvos explained that they are extremely worried as to how they will be able to cover their basic needs, particularly while being forced to live in Mavrovouni camp and not having access to any work. Some clients stated that they are “working” three shifts for different non-governmental organisations operating inside the camp and survive on the 20-euros supermarket coupons and 12-euros mobile top up cards given to them in exchange for their services, such as interpreting, helping to move tents or building ISO box containers, cleaning the bins, or gathering empty bottles.

Throughout the COVID-19 pandemic, residents of Mavrovouni RIC (and other camps across Greece) have been subjected to disproportionate and discriminatory restrictions such as curfews, restricted exits per week, and ongoing movement certification requirements. In August, exit and entrance restrictions were finally lifted for the Mavrovouni camp residents, but every person leaving the camp was forced to undergo a rapid COVID test each time they want to leave – even vaccinated persons who could present a COVID vaccine certificate. Since 11 September, harsh police controls and movement restrictions have been reimposed under the justification of “protection measures of public health from the spread of COVID-19,” whereas the rest of the local population on the island is not subjected to any restriction – let alone an enhanced restriction – at the moment. As a consequence, the camp management has resumed the publication of daily notices listing residents’ file numbers, to determine who is allowed to leave the camp “for the cover of basic needs” – such as medical appointments, asylum interviews, appointment with lawyers or public services under the presentation of a document proving those appointments.

Furthermore, the National Public Health Organisation (EODY), which operates a clinic in the camp,  announced in the last week of August that the State would no longer provide COVID-19 vaccinations for people “outside of the asylum procedure”, under the pretext that the State could not issue a vaccine certificate for those without legal status. People who already had appointments with EODY in the camp, but had since received a second instance rejection on their asylum claim, were therefore refused vaccination when they came to their appointment. Legal status has no bearing on public health imperatives, and the exclusion of migrants from the vaccination programme on this basis is a violation of the fundamental principle of non-discrimination.

For a full year, people have now been forced to live in the “temporary” Mavrovouni camp in horrendous conditions, with the poor excuse that people’s stay there would be temporary. As confirmed by the Greek proverb, “there is nothing more permanent than the temporary” (Ουδέν μονιμότερον του προσωρινού).

NO CAMPS, NO PRISONS, NOT HERE, NOT EVER!