The criminalization of refugees protesting for their rights on Lesvos Island continues.

In April 2018, 32 people from the Moria 35 who had been arrested arbitrarily following a peaceful sit-in strike were convicted without any reliable evidence. Now, three more trials against refugees will be held at the end of February 2019.

Two of the trials address peaceful protests on the central Sapphous square of Mytilene, Lesvos, in November 2017. 13 adults and 4 minors are charged. The first trial will take place on 21st of February and the defendants are charged for camping on a communal space. The second trial is scheduled for the 28th of February with the charge of attempt to occupy a public space. In addition, some of the defendants are accused for disobedience and others for resistance against the police.

The third trial addresses protests in the Syrian family section in Moria camp on March 14th, 2018. Eight people have been arrested, and five of them have been held in pre-trial detention since. Their court case will take place on the 22nd of February on Chios Island.

A fourth trial against refugees who have been protesting on the central square of Mytilene will follow. The hearing date is the 9th of May 2019. The group has been arrested on the night of 22/23rd of April 2018. They were peacefully protesting against the situation on Lesvos, when they were attacked by a group of about 300 right wing nationalist with Molotov Cocktails, rocks, sticks, and bottles. Until the early morning, the refugees were trapped on the square. While the violent attack took place, and after the violence came to an end, the police did not follow the aggressors but instead turned to the refugees who had been targeted by fascists for hours and took them to the police station. The public prosecutor’s office presses charges against them for the attempt to occupy public space, disobedience and resistance.

The upcoming court cases on the end of February mark another peak in a chain of systematic criminalization of refugees, who are only claiming their rights and protesting against the restriction of movement to the Greek Islands and the inhumane conditions in Moria camp.

Accusations for protests on the Sapphous Square of Mytilini

The events on Sapphous square

On 20th October 2017, a large group of Afghan refugees left the camp of Moria after violent incidents in the camp. Due to the inhumane living conditions, unequal treatment and the massive overcrowding of the camp, there are frequent outbreaks of violence leaving even uninvolved individuals badly injured.

About forty people refused to go back to Moria camp and stayed on the central Sapphous square in Mytilene, among them families with small children who were later joined by more people with different national backgrounds. For more than a month, the protesters slept on bare ground with only blankets to cover them. When strong rain started, the protestors usually did not spend the night in the square, but found alternate places to sleep for the night, and then returned to the square in the morning. Only some set up thin camping tents. They claimed the conditions were still better than staying in Moria camp. 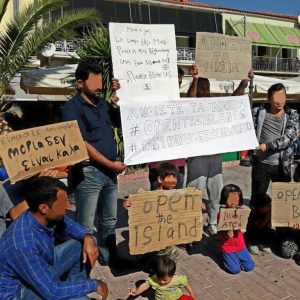 One of the protesters, a young woman from Afghanistan explained:

“They say you can only leave Moria when you are vulnerable. So they force us to stay there until we are made vulnerable. This is crazy, no one can live in Moria, especially for women it is really dangerous.”

While there was a strong solidarity movement among the Greek and international community, the protestors were also several times confronted by right wing groups on the square.

On November 20th, the municipality called for a general strike with speeches on the square that was joined by nationalist groups. The refugee protesters left the square during this assembly on November 20th and marched on the same day to the UNHCR office to present their demands for freedom of movement.

When they tried to return to the square the next day, they were surrounded by police and harassed by hostile local groups. The police aggressively pushed the refugees aside, surrounded them and evicted the square. During this action, some of the protesters were hurt by the police, including a young child. While the refugee protestors were violently expelled from the square by the police, they did not engage in any violence themselves.

More than a year later, 17 of the protestors of the Sapphous square events are now facing a trial in court. They were not even officially notified. Most of them have already been recognized as refugees, some live in Athens in the self-organized place “Hotel City Plaza”. The charges against them include camping on a public space, disobedience and resistance against the police. The court dates in Lesvos are the 21st and the 28th of February.

We demand freedom for all accused protestors. The only “crime” they committed is demanding their legitimate rights to be allowed to move freely within Greece instead of being forced to live in the inhumane conditions of the European Hotspot camp Moria. The situation in Moria has been evolving as a result of the EU-Turkey statement that forces asylum seekers to remain on the Greek Islands. A member of Doctors without Borders described Moria as “the worst refugee camp in the world”. We stand in solidarity with all of the accused people.

Accusations against the Moria 8

On March 14th, 2018 at about 6.15 pm, clashes between migrants and police took place in the Arab family section of Moria camp. Small fires broke out and the police shot teargas in the family section that badly affected the inhabitants, among them many young children. Several families fled the camp.

Three days later, eight individuals – four Iraqis and four Syrians – were arrested and charged for endangering human life. The police bases the arrest warrant on the accusation of a single person, an inhabitant of Moria camp who had at that time the function of a community leader for migrants from Iraq.

The community leader claimed to have recognized all of the eight, although it was dark, smoke and teargas was in the air and the faces of the refugees involved in the clashes with the police were covered. Many of the accused migrants reported that they did not even know the community leader personally. At the same time, none of the 17 police men who testified had been able to recognize a single person. The role of community leaders in Moria Camp, which involves appointment using various methods across different nationalities – and approval of the individual by authorities – is undefined and unorganised and leads to many different personalities filling this position.

On the day the former Iraqi community leader testified, his geographic restriction to the island of Lesvos was removed and he was able to leave to the Greek mainland. Repeatedly, community leaders reported that they have been put under pressure by the police to pass on information and were threatened with criminal prosecution themselves, or that it would harm their own asylum claim if they did not cooperate. Moreover, they are offered to be able to leave the horrible conditions on Lesvos if they work as informants. This might have triggered the only witness to make false claims and accuse eight people.

In two cases there is clear evidence showing the innocence of the defendants. One man from Syria was not in Moria at the time of the protest but in the town of Mytilene, as testified by a witness and backed up by a dated photo taken of him in town. When he arrived in the camp, he immediately helped a heavily pregnant woman in front of the camp, who had been badly affected by the teargas. Together with two other witnesses, he brought her to the hospital. The four people only arrived back in the camp at night when the clashes had died down. Another accused man from Iraq was working as translator for the NGO “Moria Medical Support” during the time of the protests.

Five of the accused have been kept in pre-trial detention since ten months awaiting their trial. On Wednesday, the 22nd of February 2019, the trial will be held on Chios Island. After the unjust conviction of the 32 people the year before, it is again likely that the accused will also be convicted without any evidence.

The lengthy pre-trial detention and the charges based on dubious accusations outline another case of criminalization of protests and a violent crackdown on resistance of people protesting.

Both trials are symbolic for the ongoing criminalization of refugees opposing the system of encampment and deportation, imposed at the EU borders.

Freedom for the protesters on Sapphous Square!

Freedom for the Moria 8!

The defendants need support for their court cases.

We collect donations on: