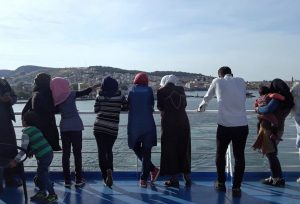 In the months since our last update on rights violations and resistance in Lesvos, our advocacy and campaigning resources were almost exclusively focused on the two trials for the Moria 35 and Moria 10 that took place in Chios in late April and early May 2018.

The situation has predictably worsened in Lesvos. On the 17 April 2018, the Greek Council of State (the highest administrative court in Greece) ruled that geographic restrictions imposed by the Asylum Service for asylum seekers arriving to the Greek islands was illegal. However, within a week, new legislation was proposed, which further limits the rights of asylum seekers and continues the practice of containing asylum seekers to the Greek islands. Moria Camp is now at three times its capacity, holding approximately 7000 individuals. Between 500 and 1000 Kurdish asylum seekers are still living outside Moria in temporary shelter provided by Lesvos Solidarity – Pikpa, and Humans 4 Humanity, as they fear for their safety in Moria. Procedures are now so delayed that even individuals who are recognized as vulnerable, and whose cases should be prioritized under Article 51 of Greek Law 4375, are being scheduled for their interviews nearly a year after their arrival. This means that they are prohibited from leaving the island of Lesvos, and are denied freedom of movement during this entire time.

In one case we are following, an eleven year old child has a serious, undiagnosed digestive condition that causes her constant pain and seizures. Because they have been unable to diagnose her illness, the hospital in Mytilene has referred her for testing and treatment in Athens. Even the Mytilene police department has recommended that geographic restrictions be temporarily lifted so that she can travel to Athens for further tests and treatment, but the Regional Asylum Office has denied this request without an appointment in the Athens hospital. Her family is now in a constant state of fear that given her critical condition, their daughter will be unable to receive emergency medical care when needed, given the lack of testing and treatment for her on the island. Already once, when she had seizures and attempted to get treatment at the hospital in Lesvos, she was not admitted because they do not have means to treat her.

The Green Party published a report on 6 June 2018 exposing the inhumane conditions that systematically violate refugee rights in the Greek hotspots. On the 1 June 2018 the European Committee for the Prevention of Torture (CPT) also published preliminary observations of its visit to detention facilities in Greece from 10 to 19 April 2018, with damning findings. As Legal Centre Lesvos, we also submitted a report to the EU Commissioner for Human Rights, documenting the systematic human rights violations of asylum seekers in Lesvos.

In the last month and a half since the conclusion of the Moria 35 trial, we have been closely following the administrative process related to the detention and processing of the asylum claims of these individuals. It has become a near full time job of our Greek attorney based in Mytilene to ensure that Greek authorities comply by their own laws and respect the rights of these asylum seekers. Despite the fact that the UNHCR, the Ombudsman’s Office, and the Legal Centre have been closely monitoring their cases, there have been rampant violation of their rights at every step of their procedures. Unfortunately despite this close monitoring, two individuals were deported to Turkey on the morning of 13 June 2018. The violations we have observed in the individual cases of these 35 men highlight the lack of procedural safeguards to protect the rights of asylum seekers, particularly those who are being detained.

Below we outline some of the observed violations of Moria 35 defendants’ rights as asylum seekers:

The trampling of the rights of these individuals by the police has followed their brutally violent arrest, their unjust prosecution, and lengthy imprisonment in the case of the Moria 35. It is not clear if the police have targeted these individuals precisely because they were part of the Moria35 case, or if the violation of detained asylum seekers rights is systematic. What is clear is that there is a lack of sufficient transparency, oversight, and monitoring of detention and deportation practices.

Despite this hostile environment, we continue providing legal aid and individual consultation to all foreign nationals who seek our counsel. We conduct approximately 10 individual consultations daily, and through the assistance of our volunteer lawyers and interpreters, hundreds of individuals have been granted international protection in Greece, or have successfully had geographic restrictions lifted so they can legally travel to mainland Europe.

We also continue to have success in assisting individuals in reuniting with family members in second European States under the Dublin III Regulation. In one case, a single young man from Haiti who is seriously ill was approved to be reunited with his family in France. While in Haiti, he had attempted to apply for a visa to join his parents and younger siblings in France, but was denied because he was over 18. France finally admitted, through our advocacy, that he was dependent on the care of his family, and that he should be able to join them in France. The fact that this individual was forced to take a lengthy, expensive, and dangerous journey to Europe through Turkey and the use of smugglers, only to be later admitted as an asylum seeker in France, shows that European immigration policies are broken.

We will continue our work to assist and help navigate individuals through this broken system, and to monitor and expose the violations of these individuals’ rights when they occur.