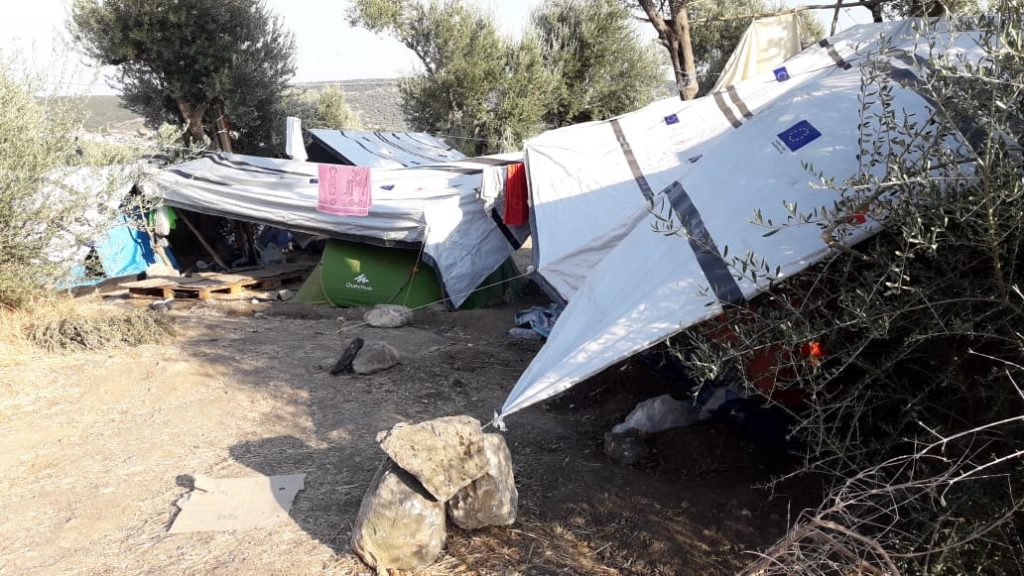 People trapped on the Greek Islands are deprived of basic rights

Since the EU-Turkey Statement, more and more people seeking protection in Europe are deported directly from the Greek Islands to Turkey. According to the European Commission, at least 2,224 people have been deported to Turkey since the implementation of the EU-Turkey deal on 20th of March 2016. Under constant threat of being deported, many people have to stay in a state of limbo for more than a year. They have to wait in the dehumanising living conditions of the barbed wired European hotspot camps on the Greek Islands that are unable to meet their fundamental needs. The deadlock situation drives people to despair. Already in 2017, Médecins Sans Frontières (MSF) denounced a “mental health emergency” on the Greek islands. In winter 2016/17 at least six people died in Moria camp (Lesvos) alone because of the terrible living conditions. According to a more recent MSF report the situation has deteriorated even further. Many people trapped in camps experience strong violence by the authorities and peaceful resistance against the situation is strongly criminalized. The EU-Turkey Deal has transformed the Greek Islands with the European hotspot camps into open air prisons. In these desperate conditions, a rising number of people agree to “voluntary return” back to their home country. After signing the return agreement with the International Organization for Migration (IOM), the individuals are normally arrested and brought in handcuffs to a pre-removal centre where they have to wait for up to several months to be deported. Between June 2016 and April 2018 more than 10,000 persons have been returned from Greece to their place of origin (regardless of the safety of the country), through the voluntary return programme funded by the EU and Greece.

Detention based on nationality

Others are deported quicker under a so-called pilot-project that targets migrants from countries with low recognition rates for international protection. They are detained upon arrival in a prison (a so-called “pre-removal center”) and in most cases have to undergo their asylum procedure without any preparation and legal support. As a result, they get caught in the cycle of unjust detention and foreseeable deportation. Some people do not even get the chance to explain their need for protection before being deported as their asylum claims are categorized as “inadmissible” under the so-called fast-track border procedure implemented on the Greek Islands. After a 2017 ruling by the Council of State finding that Turkey was a safe country for two Syrians, Syrian nationals are under threat of being deported back to Turkey because their asylum claims are categorized as “inadmissible”.

If an asylum seeker’s claim is rejected or declared inadmissible, the person is given two choices: either to appeal the rejection or to “voluntarily return” to their country of origin with the IOM. Appealing the rejection has been reduced to a mere formal act: Since the appeal committees composition shifted under pressure of the European Commission, the acceptance rate of appeals that was by the end of November 2016 at 97.9%, dropped to close to 1%. Many people know that the chance of having their case fairly examined on appeal is limited, and feel forced to sign up for the so-called “voluntary return” as their only option to escape the deportation to Turkey.

While Greek law entitles asylum seekers to have the right to appeal a second time in administrative court, in reality this is practically impossible because of the lack of sufficient asylum lawyers in the hotspot camps and the costs of a second-instance appeal.

The asylum procedure carried out by the Greek Asylum Service (GAS) and the European Asylum Support Office (EASO) has been under the investigation of the Ombudsperson and was repeatedly criticized by observers. The European Centre for Constitutional and Human Rights (ECCHR) concluded that “EASO fails core legal standards” and “EASO officers fail to respect core standards of fairness”. Whilst the Ombudsperson acknowledged serious concerns with EASO’s conduct, it was then concluded that no further action would be taken.

People deported from Europe face imprisonment and further deportation: Turkey is not a safe third country

The declaration of asylum claims as inadmissible and the rejection of asylum claims under the fast-track border procedure leading to deportations of asylum seekers to Turkey is based on the assumption that Turkey is considered a safe third country. However, the majority of deportees are in fact detained in removal prisons upon arrival where they are held in horrifying conditions for up to 12 months. Most of them are eventually deported to their home countries without having had the opportunity to apply for international protection. Turkey signed the 1951 Refugee convention, but maintains a geographical limitation meaning Turkey only guarantees ‘refugee status’ to citizens of member states of the Council of Europe. As for people coming from other countries, Turkey only recognizes a ‘temporary protection’. In theory only Syrians can get this temporary protection status, which provides very limited rights, while people with other national backgrounds can theoretically only get weak subsidiary protection status, while they wait for relocation as refugees in third countries.

According to the European Commission, since the EU-Turkey agreement came into force, only two out of all non-Syrian deportees have in fact been granted protection status in Turkey until September 2017. Many people fleeing war, persecution, and poverty do not get a fair hearing for their asylum claim in Europe or Turkey. Moreover, after a lengthy period of detention in Turkey or Europe, people are deported back to their country of origin. In several cases detainees are forced to sign return papers, or do so willingly in order to escape imprisonment. A person deported from Turkey to Nigeria reported that he had been gagged and threatened with a stun gun by Turkish police during his deportation flight.

Serious lack of transparency by the authorities

In several cases, the deportation procedures are carried out in secrecy. It is almost impossible for human rights organizations and independent actors to monitor the deportation procedure and to provide support to those being deported to Turkey. While the UNHCR is informed about the number and nationality of the deportees, in most cases neither the Hellenic Asylum Service, the Hellenic Police, the EU, nor FRONTEX are willing to share information regarding the deportees prior to their deportation, except with their attorney – if they are lucky enough to have one. Vital information is made inaccessible. Throughout the deportation, the view of the deportees is obstructed and in many cases no contact to the public is allowed. Independent volunteers who are monitoring these activities are frequently checked for documentation, detained on short terms, and intimidated by police.

Inhumane deportation practices: even sick people and people who are still in the asylum procedure are deported

People have been deported despite serious health conditions such as chronic disease, disability, and life-threatening illness. Several cases have been reported by migrants who stated that they had been woken up by the police in the early hours of the morning, given fifteen minutes to pack their belongings, brought to the police station, and were then deported. People are often prohibited to communicate with their lawyers or friends. As a result no one can provide support or legal intervention as they do not know about their situation. In other cases, deportees have been falsely told that they would be transferred to the Greek mainland and have ended up in prison in Turkey. In a few cases where the names of deportees were known, it was found that they had been deported without getting the chance to apply for asylum or were still in an ongoing asylum procedure. Directly after the implementation of the EU-Turkey statement, Human Rights Watch and Pro Asyl highlighted that asylum claims had not been considered and no legally binding deportation notices had been issued to people seeking protection prior to their deportation. In addition, lawyers have reported administrative mistakes such as mixing up case numbers. On rare occasions deportations could be stopped last minute when their lawyer insisted that their client was still in an ongoing appeal against their second rejection and only if the lawyer had arrived on time at the police station to stop the deportation.