Last week, it was reported that in response to criticism the director of the notorious Reception and Identification Centre outside Moria village in Lesvos stated that “anyone who thinks they can do better than us is welcome to try.”

What he misses is that it is actually an obligation of the State to provide adequate reception facilities for asylum seekers. It is also an obligation of the state to respect, protect, and ensure the enjoyment of human rights for all residing in its jurisdiction, including all migrants and refugees.

Three years after the EU-Turkey Statement, time has shown that the Greek state, and the European Union in its role implementing European migration policies, have utterly failed to meet these obligations. The horrible conditions and systematic procedural violations are not only morally, but legally unacceptable.

The practices we have documented in the first quarter of 2019 demonstrate a continued policy of dehumanization, discrimination, and structural violence against migrants entering Europe via Lesvos. Below is just a sampling of the continuing violation of migrants we have repeatedly reported on.

Two ways in which individuals are granted permission to leave Lesvos before their asylum claims are processed are if they are designated vulnerable (a legal designation under Law 4375/2016) or they are found eligible for transfer out of Greece through the Dublin III regulations. We welcome the fact that in 2018, 85% of asylum seekers in Lesvos were granted permission to leave the island on one of these bases. However, due to overcrowding in government provided housing for asylum seekers throughout Greece, the delay for being transferred off the island after permission to leave is granted can take several months, meaning that thousands of individuals who are recognized as vulnerable must remain in Moria Camp unless they are able to secure their own housing.

Furthermore, those who use their own means to travel off the island, and secure their own housing, face further procedural obstacles. While many individuals we have been in contact with have attempted to register at the nearest asylum office after they have moved off of Lesvos, they have either been unable to access the asylum office, or officers at the nearest asylum offices have refused to transfer the individuals’ asylum cases to the nearest office, as is their right. This has meant that these individuals must return to Lesvos for their asylum interviews at their own expense (both travel back to Lesvos and accommodation in Lesvos).

Failure to appear for an interview results in the interruption and closure of one’s asylum case, which has been practically impossible to reopen for many individuals, since 2018 amendments to the Greek Asylum Law require that the asylum seeker show “with specific evidence that the decision to discontinue was rendered under circumstances independent of the applicant’s own will.” Article 28 (8), Law 4540/2018.

While individuals who have been designated vulnerable are currently not subject to being deported to Turkey, they are left without status, in a state of legal limbo. Furthermore, there is no guarantee that asylum interviews will take place on the date scheduled, and several individuals have reported to our office that they returned to Lesvos for their interview only to have it postponed.

For several months, the Regional Asylum Office in Lesvos has required that those whose asylum cases are approved, to provide proof of residence in order to obtain a Greek resident permit, contrary to Article 24 of Law 4375/2016, which provides that it is an obligation of the competent Asylum office to provide individuals with resident permits if their cases are approved. The vast majority of those granted status in Lesvos are still living in Moria Camp, however, RAO will not issue IDs to these individuals, requiring instead that individuals provide a rental contract for housing outside the camp. This arbitrary requirement, which was not required in the past and is not required from other Regional Asylum Offices in Greece, is a practical impossibility for most individuals and denial of IDs perpetuates the marginalization and exclusion of these individuals from political and civil society.

The Legal Centre has represented an increasing number of individuals applying for reunification with close family members outside Greece under Dublin III regulations. While in past years, copies of identification documents showing family links were sufficient, increasingly the Dublin Units of Third European Countries, in particular Germany, have required individuals to provide translation of documents and DNA evidence, and have required the advocacy of lawyers in order for claims to be approved. European regulations, and Greek law provide that it is the obligation of the state to translate any supporting documentation (Law 4375/2016, Article 41). However, we have documented several cases where the German Dublin Unit has required translation of documents before accepting them as evidence in support of claims.

Greece continues its discriminatory practice of detaining upon arrival individuals based on nationality in Lesvos. While the number of detainees in Lesvos has decreased, this is mainly due to the change in demographic of arrivals in 2019 – the vast majority are Afghan nationals who are not subject to detention on arrival.

There have also been reported cases of the deportation to Turkey of individuals who have not had their claims heard in Greece. One Senegalese national, who through an attorney had notified the police and asylum office of his intention to file a subsequent application for asylum was deported to Turkey before this claim was considered.

Resistance and Organizing in Greece 3 Years after EU-Turkey Statement 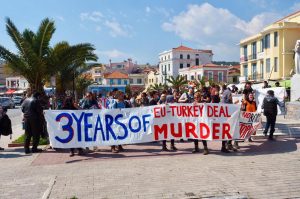 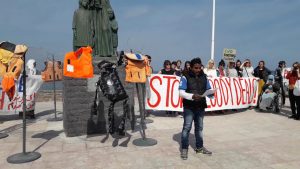 Since August of 2016, the Legal Centre has operated on principals of nondiscrimination, support for migrant movements, and in recognizing and advocating against exclusionary polices of the EU and Greece. We have not compromised these positions to secure funds, and have limited our funding from individuals and donors with a similar ethical standing as our own in order to maintain our independence. We are proud that our political positions have been recognized by partners and funders alike. In 2019, we secured increased support from La Garriga Societat Civil and Fons Catala. Additionally, in March 2019 Fundacion Heres has renewed its support for the Legal Centre, for a limited time period. Because of this support, we are now able to recruit for a fundraising position, in order that we can ensure the continued and sustainable presence of the Legal Centre in Lesvos.

In other funding news, the Mosaik Support Center and Lesvos Solidarity – Pikpa are going through funding crisis and need your help. Since we started working on the island, the Legal Centre has been hosted in Mosaik Support Centre, which provides a space of warmth, safety and community for the most vulnerable populations on Lesvos. Over the past two and a half years, we have been proud to be a part of this community formed at Mosaik Centre. Please see the linked statement and share with your networks in order to secure sustainable future of Mosaik Centre and Lesvos Solidarity.