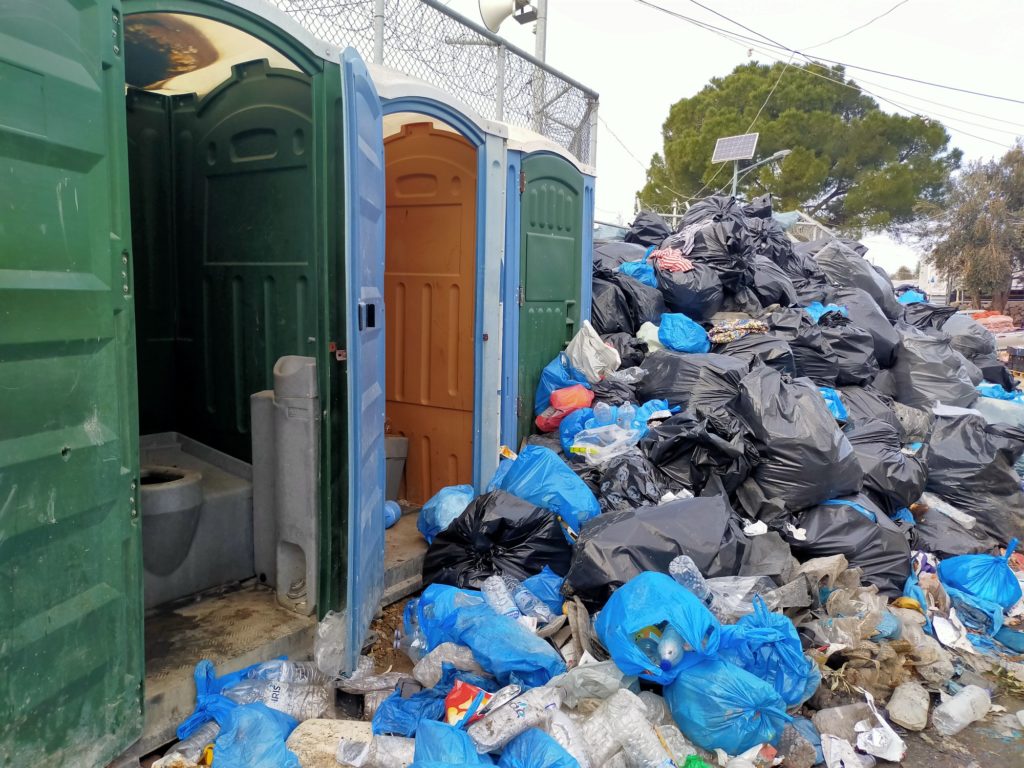 A nationwide ban on “all unnecessary movement” has been introduced in Greece, to prevent the spread of COVID-19. However, the national measures fall far short of the disproportionate restrictions imposed on the migrant community three days earlier – which have effectively facilitated their mass detention in camps where hygiene conditions are dire, and where few measures have been taken to prepare for, let alone prevent, an outbreak.

Restrictions on movement are a necessary response to the virus, when applied systematically and in combination with robust healthcare measures. In Lesvos, neither of these conditions are met.

Across Greece, those leaving their place of residence must carry a paper or send an SMS that indicates – from a set of reasons, including personal exercise, visiting the bank or going to the supermarket – why they are outside the house. Yet reasons that are valid across the country are, unsurprisingly, abandoned in favour of far stricter rules for migrants.

Since 19 March, migrants must gain police or security authorities’ written permission before leaving the refugee camps in Moria and Kara Tepe – the two main state run refugee camps in Lesvos. Only one member of each family can leave the camps per week, a measure that is strictly enforced – despite the fact that no such restriction exists for people living in towns and cities across Greece. Those without written permission will be blocked from leaving by police – either at the camps’ exits, or at checkpoints on the roads that lead to the city of Mytiline – and will not be able to board public buses. An increased number of police units have been deployed around the camps, to enforce these restrictions.

Furthermore, the restrictions on migrant mobility have not been paired with any preventative healthcare measures. Instead, they have led to multiple human rights abuses, and exposed the community to far greater risk of the spread of COVID-19:

– The ability to practice “social distancing” in Moria camp is impossible: over 20, 000 people are now detained together, in facilities designed for a seventh of that number, crowding together in lines for food, the bathroom, and within their own living structures. Beyond the physical risks, containment in such dire conditions has led to a well-documented mental health crisis, and on Friday, a twenty-year-old man apparently commit suicide in the camp. The expansion of the camp’s detention infrastructure will further isolate the migrant community, with foreseeable and devastating consequences.

– On Wednesday, a national holiday, one individual residing in Moria camp was suffering from a high fever – a known symptom of COVID-19. He could find no open health clinic in Moria Camp, yet when he attempted to leave the camp in order to visit a doctor, he was refused by police who said that he first needed a referral from an internal clinic. He was sent back into the camp. Thanks to coordination between Legal Centre Lesvos and Medical Volunteers International, he was visited by a volunteer doctor who happened to be inside the camp at the time. Without such collaboration, he had no prospect of timely assistance.

– In Kara Tepe camp, residents must request permission from camp security to leave the site, which will be granted for an allotted time – for example only one hour is allowed to leave the camp for shopping for food. Trips to a specified supermarket (located outside of Mytiline) are allowed every seven days; those who need to visit a pharmacy in town must show their prescription, before they are allowed to leave; and those who wish to see a doctor or visit the hospital have been told that, instead, they will be treated in the camp’s clinic. Those who have a fever and who visit the camp’s clinic are reportedly given paracetamol, and told to return to their containers.

– Prior to restrictions being imposed on the camps, approximately ten families were transferred from Kara Tepe camp to mainland Greece. The containers they had lived in remain empty, as all transfers into Kara Tepe camp have stopped since the imposition of limits on migrant movement. Hundreds of vulnerable individuals are living in chronically overcrowded Moria camp, including families with newborn children and immuno-compromised elderly folk. Transfer to Kara Tepe, where movement restrictions apply but where living conditions are far superior, would transform their quality of life – and protect them from the risks of a COVID-19 outbreak. Instead, those containers remain empty.

– The Greek government announced this week that financial support, provided through the UNHCR cash assistance program, would be delayed until ATMs can be constructed inside camps – furthering the infrastructure for the isolation and containment of the migrant community. There appear to be no plans to make up for the loss of cash assistance, which – though minimal (approximately 90€/month) – allowed individuals to cover their basic needs, such as hygiene products, child-specific food, clothing or bedding, all of which are limited in camp.

Conditions for new arrivals to Greece are even bleaker. Those who manage to survive the dangerous sea crossing from Turkey – under increasingly hostile surveillance by the Hellenic Coast Guard – are immediately detained upon arrival in make-shift detention areas guarded by police. There have so far been two mass transfers of post-1 March arrivals to two main detention camps on mainland Greece: Malakassa and Serres.

In Malakassa, more than 1, 300 people – including elderly people, infants and heavily pregnant women – are detained. The camp is split into three sections, separated by fences; in one section, which houses over 450 people, there is just one portable toilet to each fifteen people. Access to running water is sporadic, and hygiene products have only been distributed once in the past two weeks. Precautions to prevent an outbreak of COVID-19 are therefore impossible. Furthermore, detainees have only been given a thin mat and blanket to sleep with, despite the cold weather. Many have complained that they, and their children, are becoming ill.

In Serres, detainees – including members of the same family – have been split between two sections of the camp, which are separated by fences. Conditions in both, however, are dire. There is little to no electricity, making it near impossible for detainees to charge their phones and communicate with their loved ones, solidarity groups, and lawyers. There are just seven toilets shared between over six hundred detainees, and two hours of running water per day. The camp has been visited just once by a doctor, who only saw children’s cases. Legal actors have been unable to access their clients, despite making repeated requests to management authorities. Human rights abuses are built into the structure of these detention camps.

New arrivals face the same uncertainty as those detained in the previous few weeks. At present, 24 individuals – including 5 children – are detained in the Mytiline port, where they have been caged in a small area since 22 March. They have access to one toilet, and only a public bus for shelter from the elements. Since they arrived, they have not been able to bathe, nor been provided any non-food assistance by the state.

Through coordination with other actors, including No Border Kitchen, we have distributed blankets, toothbrushes, soap and a change of clothes; however, access remains strictly restricted. Detainees have been unable to charge their mobile phones since they arrived, and therefore have not even been able to contact their loved ones – let alone legal actors. We have only been able to communicate with the detainees by shouting back and forth through the fence. Lawyers have only been granted port access to visit specific, named clients – and without knowing the identity of detainees, it is difficult for the few legal actors on the island to reach them. Moreover, despite having been held for more than a week, individuals in the port are yet to be issued a detention order that would give even a pretension of legitimacy to their confinement.

The disproportionate restrictions that apply to migrants’ movement are not being taken to protect public health. Were that the case, the immediate improvement of camps’ health and sanitation infrastructure would be underway; so too would the evacuation of vulnerable and immuno-compromised migrants. From Moria camp to Malakassa, and across Greece, migrants are being confined to inhumane conditions where they are at extreme risk of a wilfully uncontrolled – and uncontrollable – COVID-19 outbreak.

The COVID-19 outbreak is being instrumentalised by states across the world to achieve pre-existing policy objectives, which coterminously exposes the ongoing prioritisation of economic function over human life. While it has provided cover for the Greek government’s extension of the detention estate and their expanded control over migrant mobility, those who are unable to work from home – such as those in public services or in factories – are continuing to operate as normal, at great risk of exposure to and infection by COVID-19. Unless migrants and citizens alike organise to resist the subjugation of their safety to the objectives of the state, the insidious policies introduced under the cover of this pandemic will endure far beyond the virus itself.